The month of March brings us long-awaited spring, with warmer and longer days and a friendly reminder that summer is not too far away. It is also a month that celebrates International Women’s Day. The theme for this year is #BalanceForBetter and is urging everyone to strive for a gender-balanced world. It is a cause for all to share, not just women.

The holiday initially was created in 1911 by women to promote equal rights including suffrage. In a bit over 100 years, the progress we made as a society when it comes to gender equality is significant. In Canada, Manitoba was the 1st province to grant women the right to vote on January 28, 1916. Two years later, in 1918, Canadian Women gained the right to vote at the federal level.

In medicine, women had also struggled for gender equality. Medical professions were reserved to men.  In 1868 Emily Howard Stowe became the first Canadian woman to practice medicine in Canada. She had to go to medical school in the United States (New York Medical College for Women) because Canadian institutions did not allow women to study medicine.

It seems that these women-firsts accomplishments happened quite some time ago. Nevertheless, in Canada, women physicians accounted for only 7% in 1970-ies! Better improvements are seen recently. As of 2017, according to Canadian Institute for Health Information, female doctors make up 41% of all doctors (physicians and specialists). Family medicine has 46% females, while specialists have a lower 39% and surgical specialists have even a lower rate of 29%.

Many reasons exist why women choose family medicine. This study cites that women interested in surgery still face discrimination within medical school, in training programmes and in consultancy positions. It lists many factors that impact a junior doctor’s choice of specialty, including an attraction to the work itself, the perceived lifestyle of doctors in that specialty, and the existence of a mentor or role model in that field. In surgery, many of these issues have been identified as pushing women away from engaging in surgical training. These include a lack of female surgeon role models, and perceptions that surgical lifestyle is not compatible with the disproportionate burden that women bear of care-giving responsibilities.

Looking deeper into opportunities to create gender balance among surgical and specialist medical professions is needed. Mentorship and accessibility of medical training programs is necessary to remove barriers, internal and external, to gender equality. It is 2019, Happy International Women’s day everyone!

March 10-16 is World Glaucoma week. The purpose of it is to bring greater awareness to the disease. In Canada, and in the world, glaucoma is one of the leading causes of blindness.  It is estimated that 294,600 people in Canada are blind due to glaucoma.

Glaucoma is a group of eye diseases which lead to progressive degeneration of the optic nerve. This in turn can lead to loss of nerve tissue that results in gradual irreversible vision loss and potential blindness if not detected and treated early. More than 250,000 Canadians have chronic open-angle glaucoma, the most common form of the disease.

It is not known how damage to optic nerve occurs. However, there is an association between damage to the optic nerve and pressure within the eye due to build up of excess fluid. As disease slowly develops, patients with glaucoma may experience a gradual loss and narrowing of peripheral vision. This is called tunnel vision.

Since glaucoma develops slowly, many people will go years before noticing any symptoms. Often, they don’t know they have glaucoma until they lose some of their eyesight. That is why the diseases is also called the silent sight thief. Loss of vision from glaucoma is not reversible.

Who Is at Risk?

Glaucoma can occur in people of every race, gender, and nationality. Anyone can develop glaucoma, but some people are at greater risk. If you meet one or more of the following criteria, you have an increased risk:

What Can You Do to Protect Yourself?

Get regular eye check-ups. Eye doctors can detect and treat glaucoma before most patients experience any symptoms. There is no cure for glaucoma but there are medications that can help slow its progress, so early detection and treatment of glaucoma are important

It is important to have your eyes examined regularly. Your eyes should be tested:

Eat healthy to stay healthy – we have seen and heard this in many places and from many authorities. No one would argue that eating healthy food is bad for you. However, what food is healthy and how do we know? The answer to these questions can be inconsistent and change over time. This makes it hard to make good choices when it comes to food.

At the end of 2018, the government of Canada released an updated food guide. According to it, ½ of your plate should be fruit and veggies, ¼ protein and ¼ whole grains.   Juice is out, and water is in! Milk is only advised if it is a lower fat kind and with no added sugar. The majority of low-fat milk sold in Canadian grocery stores, however, has sugar, make sure you read the labels! The guide lists multiple vegetable sources of protein and advises to chose lean meats such as skinless poultry and lean cut of meats. Although many of us knew this, such move by the government declared its position – to encourage Canadians to eat healthy and to provide them with sensible food guidance backed by science. 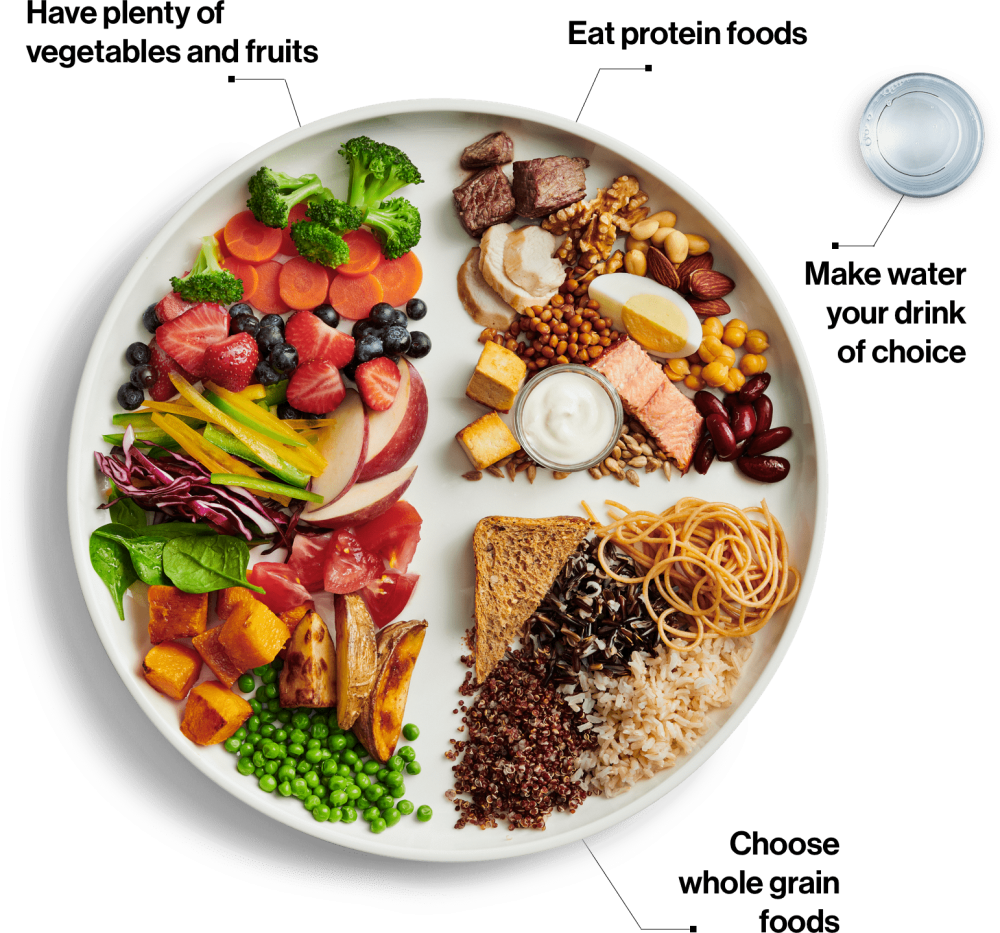 One of my favourite recommendation in this guide is a suggestion to eat meals with others. I love it because it creates a wonderful atmosphere of enjoying a meal while connecting to others. Many families make it a point to have at least one meal together a day. Although it may not happen every day, it is still such a great goal to have. Trying to expand this tradition, meals are great when shared by others – co-workers, neighbours, friends, people you play sports with or volunteer. It is also an opportunity to try food you have never tried before.

More information about the new Canadian food guide can be found here.

Want to join the discussion?
Feel free to contribute!